The double bank holiday has passed but the bunting’s still fluttering.  There’s a lasting whiff of festivity in the air.  What can it mean? Have the British developed a continental-style taste for fiesta and carnival?  If so, what further opportunities are there to satisfy this new appetite?

The answer, clearly, is to introduce more bank holidays. But we’re suspicious of any treat that comes out of the blue. We feel the occasion has to be justified in some way.  In short, we need more anniversaries to celebrate. So what events in history loom large enough to deserve bank holidays of their own?

Let’s look at next year. 2013 throws up quite a few major commemorative opportunities.  For instance, it’s the 75th anniversary of the first issue of the Beano – a notable moment in Britain’s development as a nation of scholars and thinkers. In its honour I propose a departure from the norm – a bank holiday on a Thursday, the eminent organ’s weekly publication day. Black-and-red striped pennants will fly from public buildings in honour of Dennis the Menace and Beryl the Peril, and, appropriately in a time of government by Old Etonians, all citizens will dress for the day as Lord Snooty and his pals.

Next year is also the 50th anniversary of Sir Lord Alan Sugar’s first business venture, when the 16-year-old prodigy took to the streets selling car aerials from the back of a van.  I suggest we pay tribute to that turning point in technological history by following Beano Thursday with Sralan Friday. The streets will be lined with people wearing Sid James masks and chanting the inspiring but mysterious mantra: “It’s awe about sows!”

Looking ahead to 2016, it’ll be 40 years since the appearance of the Sony Betamax – a perfect inspiration for bank-holiday revels in cardboard-based fancy dress. Watch out for local press shots of smiling japesters wearing outsize boxes vaguely resembling electronic items and accessories. Toddlers at village fetes will be puzzled by adults dressed as cuboid video recorders, hilarious fax machines, unspooling audio cassettes and TVs on pillars with outsize backsides. 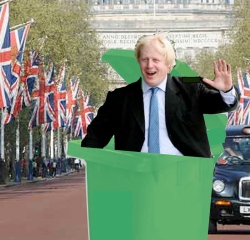 2017’s place in the annual pantheon is assured. It’s the 40th birthday of the wheelie bin.   The ruby anniversary of the British patent merits a new national holiday: Bank Holiday Binday.  The celebratory cavalcade along The Mall will feature senior citizens, babies and Boris Johnson.  Casting aside mobility scooters, pushchairs and bikes, they’ll trundle majestically past cheering crowds in battery-powered bins bearing notice of next emptying day.

But back to the immediate future. There’s something familiar on the horizon. 2012 marked 60 years since the Queen took on the job. But she wasn’t crowned till 1953. So hang on to the tri-coloured top hats and union jack waistcoats and get ready for Coronation Jubilee Year, 2013.  Yes,  just six months to go and we can start celebrating again.  The plastic cup industry’s facing a boom.