I don’t recognise anybody any more. It was OK until a few days ago. I’m sure it will be fine some time soon. But right now, I’m surrounded by strangers. 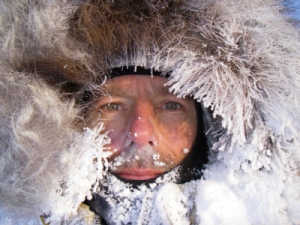 Is that Auntie Maude?

When the temperature drops, collective disguise takes over. Faces which have been perfectly identifiable for the past ten months become small egg-shapes surrounded by fleecy cocoons. Bodies which were slim, not-so-slim or somewhere in between become standard Michelin-man figures.

Everybody seems to have an arctic-weather wardrobe which they bring into action for six weeks or so every year – or at least every year since global warming paradoxically brought us Christmas card winters.

So as I stroll along the street, laptop-case over shoulder, en route to a coffee shop that will accommodate me and the job in hand for the price of an espresso, I find myself ignoring friends and acquaintances every step of the way. Polar explorers loom from their thermal wrapping, but I’m unable to distinguish most of the features I depend on for identification. Eyes, nose and mouth are not enough. I need all the other clues. 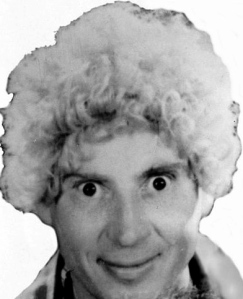 It’s a reminder of how much goes into the visual identity of any individual. Yes, there’s the face, but when it’s protruding from a hood the contours are concealed and it has no unique shape. Crucial factors like the set of the ears, the haircut and the swan- or bull-like neck are absent.

The arctic disguise confuses everything. Harpo Marx said ‘Good morning’ to me the other day. Only when he’d passed did I realise it was my neighbour enveloped in an outsize white tufted helmet.

Then there’s the body. Everyone’s a bulging tube at the moment. Polar fashion is big and cylindrical. Nothing wrong with that – let’s not get biggist and cylindricalist about this – but it does tend to obscure the differences between people. 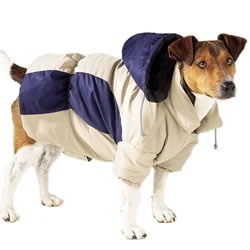 "What d'you mean, I look different?"

And not only people. A dog I know padded up to sniff my nether regions recently.  I didn’t recognise him because he was wearing a quilted gilet. We’d normally swap a quip or two but I didn’t feel we’d been properly introduced.

He seemed insulted and stalked off.  After all, he’d identified me, and like everyone else I was dressed in a zip-up eiderdown.

That caused a problem itself later. When I got to the coffee shop there wasn’t enough room in there for both me and my coat. It’s so generously stuffed with high-tog padding it sits up by itself, occupying a whole seat as if it’s an independent customer.

"I'll just have a croissant, actually."

It was a busy day.  There was competition for tables.  The staff didn’t seem too keen.  I thought about ordering a coffee for the coat but that’s about two pounds.   I decided against it and we left together.

As I write, an international rugby match in Paris has just been cancelled five minutes before kick-off. The camera’s tracking across 80,000 spectators. It’s a sea of fleece, fur and quilting, broken only by pink, rugby-ball-shaped sections of face.

They’re all making booing shapes with their chapped lips. Interesting linguistic point: even the French seem to be shouting “Boo” – although maybe it’s “Bou”. The Irish visitors are actually smiling while they’re booing. They’re in a rare situation for any rugby fan: they’re on a trip to Paris and they’re not going to see their team lose.

In the commentary box it’s a bewildering line-up of tubular duvets topped off with cossack hats, beanies and WW2 flying ace headwear. There’s a minimal glimpse of facial features in each combination – but no quiffs, shaven pates, cauliflower ears or tree-trunk necks emerging from mandatory Cameronian tieless suits. They’ve lost their identities.

We’re talking corporate identity, here – literally, not in the metaphorical way we normally use the term. But this does have a bearing on that much-maligned aspect of the communicator’s art.

A little goes a long way

Casual observers often criticise organisations for logo and namestyle redesigns which consist of little more than a slight change of typeface or colour. But it’s likely to be a case of sophisticated canniness on the designers’ part.

They realise that a company’s graphic image has a useful bank of familiarity that shouldn’t be dispensed with. A small refinement here, a little tilt there and you can tip the emphasis in the desired new direction. Dispose of most of the elements familiar to the public and you’ll lose the recognition you’ve spent years building up.

For instance, the recent change to the Firefox logo is probably indistinguishable to most people who click on it countless times a day. Yet the new version has a glossier planet Earth and a softer, furrier-looking fox. Its generic landmasses are even more generic and less mistakeable for specific continents. And they’ve simplified the whole thing by reducing the level of detail.

So even if you never realised that it was a fox with a fiery tail that was encircling the world, even if you’ve never bothered to try and identify the landmasses, even if you find the whole thing too small on your screen to pick out anything consciously, the fact is you’ll now be seeing something that’s cleaner, simpler, more immediate and, in the concentrated time frame of digital development, more contemporary.

And that’s vital in the world of the icon. Yet you’ve not been thrown by the change.

Hang on – is that the girl from the newsagent’s? She’s got a fox on her head, and its tail’s on fire. Blimey, it must be cold. 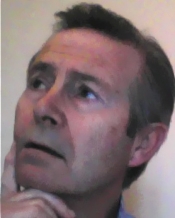