In a year when dictatorships have crumbled, economies imploded and social order disintegrated, we have seen the passing of the most significant example of man’s eternal optimism in the face of insurmountable odds.

I refer, of course, to Robert Robinson’s hair. 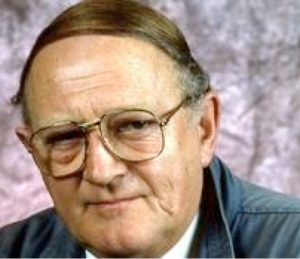 In August we said goodbye to this, well, figurehead.  The brain was renowned, but the cranium was spectacular.  Robert Robinson’s hair was one of the wonders of the late twentieth century – a battened-down flap stretching from just above the left ear, bridging the naked scalp like a bandage on a snooker ball, and secured on the far side by an invisible safety pin.  Yet the remarkable dome received nothing like the appreciation it deserved.

Obituarists jostled to deliver their thoughts on his formidable intellect, his refusal to moderate his sesquipedalian vocabulary and his unusual straddling of the worlds of journalism, punditry and quiz shows. In my view he was one of the best broadcasters in the business.  But although it was mentioned in passing, his coiffure should really have taken centre stage.

These days we’re in thrall to abstracts like the service and finance sectors.  We’ve forgotten about basics like heavy engineering.  If Robinson‘s hairdresser had been around in the age of Brunel he’d have been ennobled for his contribution to the construction industry.  Today, he should be leading research into overcoming gravity.  Instead, this inspired prankster-genius remains anonymous, and an age of preposterous hair-teasing has passed with the demise of the last surviving public example.

"It's just something I threw on."

Until 1993 Robinson’s main challenger for complicated hair sculpture was the novelist Anthony Burgess.

Robinson tackled the daily construction seriously by employing his trusted expert to re-create the masterwork every morning.  Burgess seems to have been less businesslike.  He simply parted his assymetric locks the wrong way to cover the shiny void, and never left the house on a windy day.  While Robinson’s rug always looked shaped and glued to his head and his alone, Burgess’s looked as if he’d picked it up and tried it on in a pound shop, then walked out without checking in a mirror.  It was the equivalent of a one-size hat that fitted nobody.   He looked pleased with it.

For years the most prominent exponent of this hair genre was a sainted figure still with us.

In a less priggish era when it came to match preparation, Bobby Charlton’s team mates would no doubt limber up in the dressing room with a last fag and, before an evening game, a quick pint.  Evidence suggests that Bobby would concentrate his efforts on cementing a long strand of hair into place across his skull so that nobody in the world would ever know that nothing grew on top of his head.

Then he’d run out of the tunnel – into the Old Trafford cross-wind. 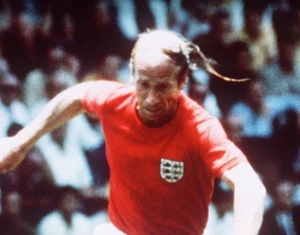 Immediately he’d be transformed.  In an instant he became the earthly equivalent of a comet, arcing across the pitch with a serpentine tail streaming into infinity in its dramatic wake.  Forty thousand people in the ground, and four million Match of the Day viewers, would regularly witness the exposure of the gleaming nut.  Yet for the after-match interview the lid would be fastened back into place and, inexplicably, the midfield maestro would act as if his secret was safe.

Clearly, what all three characters could have done with was crisis management PR.  If you’re uncomfortable about it, don’t just cover it up.  Either the cover will inevitably be swept aside and the exposure will be more noticeable than if you hadn’t bothered (the ‘Charlton’), or the cover-up itself will look so artificial your target audience will sense there’s something lurking underneath (the’Robinson’) or, worst of all, both effects happen simultaneously (the ‘Burgess’).

PR experts would say: “Acknowledge the situation and turn it into an advantage.”  For instance, Sir Bobby’s trailing strand could have been left unteased and marketed as an attacking benefit.  Many a defender will have felt the whiplash effect of the comet’s tail and kept a wary distance afterwards.  An opportunity there, you’d have thought, for a patented headband version for sale to ambitious players with or without a full thatch.

The Robinson creation could have been promoted as a live demonstration of the power of a strong adhesive – not so much a cover-up as a sponsored display of Araldite in action.

The Burgess?  Well, there’s only so much PR can do.